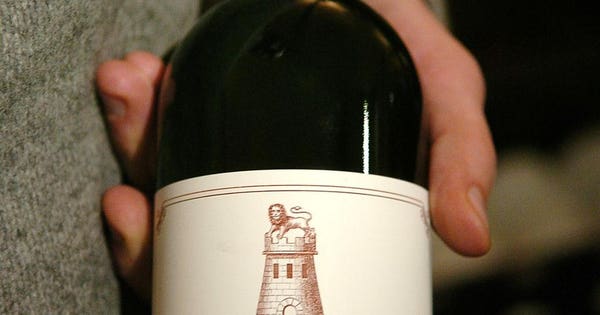 A bottle of Chateau Latour displayed in a wine shop in Paris, France. A boom in fine-wine demand has lead to more innovative ways of trading and investing in the top vintages. (Photographer: Antoine Antoniol/Bloomberg News).BLOOMBERG NEWS

Premier Cru or Grand cru classé? Well, I’ll confess that I do like a good bottle of Bordeaux having worked on the vineyards of southern France. And, while most of us don’t possess the nose of top U.S. wine critic Robert Parker, we can still appreciate the merits of investing in wine.

Now given where the traditional financial markets are trading right now – from the FTSE 100 to the S&P 500 as well as gold – it would seem appropriate to consider alternative asset classes – if only for protection. Besides fine wine investment, one could include art and luxury cars in the mix.

My interest in wine was also recently whetted during a visit this summer to Slovakia, where I paid a visit to Wine Not? bar in Bratislava that is stocked with a massive thousand bottles and the ELESKO wine park and museum nearby at Modra for wine tasting with a sommelier. More recently, just last week I attended a wine tasting event led by a Finnish wine expert at the Humble Grape that was hosted by CommsCo PR agency at London’s Liverpool Street.

History shows the Romans brought the first vines to France in around 500 BC and planted in Bordeaux around 50 BC. While the drinking and worshipping of wine dates back longer than written history itself and is said to have emerged with civilization itself from the East, investing in wine is a more recent phenomenon – but not entirely new.

That said, only recently have IFAs (Independent Financial Advisors) been comfortable to include wine in their standard selection and investment choices. Returns for some fine wines produced in very limited quantities over the past few years have been pretty stellar – driven by an interest in exotic assets generally. But if one wanted play the investment-grade wine market, the typical entry level is around the £10,000 (c.$12,700) mark.

Just over a decade ago in March 2006, Latour and Lafite Bordeaux reds from 2000 were fetching the highest auction prices in London since the landmark 1982 vintage, while the 2000 Margaux, Haut-Brion and Cheval Blanc were the most expensive at the point in time since 1990.

In 1855 Napoleon III effectively kick started the origins of the “Fine Wine Index”, when he classified the wines of Bordeaux on a scale of 1 to 5. His decisions were based on the quality and prices realized at each of the Chateaux wines over the previous hundred years.

And, apart from a sole change in 1979 – when Chateau Mounton-Rothschild was promoted from a second growth to a first growth wine – nothing has ever changed. The laws Napoleon put in place 163 years ago are stringently upheld now and controlled by the Institut national de l’origine et de la qualité (INAO), which is charged with regulating French agricultural products with protected designations of origin.

Today about fifteen Chateaux are regarded as the best for investment purposes, with each producing around 10 vintages said to be worth buying. Pundits out there suggest that potential investors should purchase the Bordeaux Grand Cru Classés, which account for the largest part (c.75%) of the investment-grade market for fine wine.

Over many decades, first-growth Bordeaux wines such as Château Lafite Rothschild, Haut-Brion, Mouton Rothschild, Margaux and Latour have generated pretty sound investments returns. Added to that leading Burgundies, Rhones and wines from the Champagne region have performed nicely too.

Among the factors contributing to fine wine’s strong recent performance and advantages to investing in the sector, the following points can be considered:

Buying a Vineyard in France

If you were so inclined you could even buy a hectare or two of vineyards in Bordeaux in the south west of France, depending on how much you could run to. Through prices vary considerably from the most expensive to the least; one thing appears clear in that prices for top Bordeaux vineyards have been rising sharply of late.

Figures released this August by the French government revealed that you could pick up a hectare of an “ordinary” vineyard in the Bordeaux area for less the €10,000 (c.$11,400), but others at the top end were are selling for millions of euros per acre. For instance, in St Emillion, the French insurer Scor paid €178 million (c.$203 million) for a chateau with 29 hectares of vines (i.e. c.€2.5 million (c.$2.85 million) per acre).

According to property consultancy Vineyard Intelligence, that of around 7,300 vineyard estates and producers in the Bordeaux region between 150 and 200 have been acquired by the Chinese. Demand from Asia has been growing from a relatively low base.

Things hotted up this September, when Château Pétrus, one top Bordeaux vineyard, hit the headlines this September following a story in French newspaper Les Echos, where it was reported that Alejandro Santo Domingo, a Colombian-American billionaire, had acquired a 20% stake in the business.

Two-thirds (66%) of financial advisers in Britain believe that investor portfolios have become too heavily weighted towards equities in recent years and three quarters (75%) are concerned that these investors are “over-exposed” to elevated levels of volatility, according to new research by Cult Wines, a leading fine wine investment company.

Given the robust defensive qualities of fine wine versus equities, a recent new report has indicated  that 66% of financial advisors believe that certain investors should “consider diversifying” their portfolio by investing through fine wine, citing its “low correlation” to traditional asset classes (75%) and strengthening demand from China and other emerging markets, with limited supply (57%) as key reasons for increasing exposure.

In its recent report, ‘Fine Wine versus Global Equities’, analysts at London-headquartered Cult Wines, with offices in Hong Kong and Singapore and over £95 million (c.$108 million) of assets under management, also showed that during periods of economic deterioration fine wine compares favourably to the performance of global equities.

Indeed, over a 10-year period from December 2008 to December 2017 the Liv-ex Fine Wine 1000, an index tracking the prices of 1,000 wines from top wine-producing regions around the world, experienced less than a third of the volatility of the MSCI World Index, providing investors with greater consistency and more stable returns.

The report also highlighted how the performance of the Liv-ex Fine Wine 1000 compares favourably to those of the FTSE All-Share index and gold futures, both during the depths of the fiscal crisis (2008 to 2010) and during the peak of the economic recovery that followed in the period 2015 to 2017

Piers Cushing, a Partner at Plurimi Wealth who previously spent 11 years at Barclays Wealth, commenting on the landscape said: “While interest rates remain suppressed, ‘luxury’ investments will remain a compelling complement, or even alternative, to conventional asset class investment. This is increasingly the case for fine wine given the scarce nature of the market. With scarcity comes pricing power.”

According to the research from Cult Wines, nearly 7 in 10 (69%) of advisers expect their peers will become increasingly familiar with the role that fine wine can play in an investment portfolio. However, what will be key to boosting awareness – cited by 82% of advisers – is “greater availability” of credible performance data comparing fine wine to traditional asset classes.

While fine wine has long boasted a reputation as a defensive asset, Cult Wines’ study demonstrates the extent to which wine can retain its “diversification benefits” even amid broader economic deterioration. This analysis shows that fine wine remains a viable alternative asset class because of its distinct defensive qualities.

A runner-up in the 2012 edition of The Apprentice BBC TV show, Gearing, who works alongside his chairman father, Philip Gearing, added: “We are seeing growing demand among advisers for data showing the relative performance and volatility of fine wine versus equities.”

“Advisors are seeing a role for fine wine beyond a ‘passion asset’ and we expect to see growing interest among everyday investors. As such we are optimistic about the future growth of the fine wine investment market. With the right expertise, investors will have significant opportunities to bolster their portfolios with a stable, defensive asset class.”

Investors seeking to achieve greater diversification benefit can do so by following Cult Wines’ approach to portfolio construction, which involves going beyond traditional assets such as Bordeaux and Burgundy, by offering balanced exposure to so-called emerging markets like the U.S., new estates, back vintages and en-primeur wine futures.”

Perhaps one of the most interesting aspects around fine wine investing is that it is characterized and deemed a so-called “wasting asset”, which makes it exempt from capital gains tax (CGT). This, under Section 44(1) of the Taxation of Chargeable Gains Act 1992 it because its predictable life is viewed as “not exceed more than 50 years.” But here it is probably best to seek advice from a tax adviser on tax efficiency.

Should you also be cold called about wine investing by someone speaking about the merits of wine as an investment and saying they will send you an investment pack, especially if the global equity markets are taking a nose dive, be wary. Such firms have fleeced investors before the authorities have closed them down.

While there are risks of course with any investment, given the niche characteristics and relative size of the fine wine market insulates it from the wider macro-economic factors and safeguard investors from greater loss. And, with the strategic case in terms of an alternative asset class being made – at least by this study – and growing interest from China, Mexico, parts of Africa and south-east Asia, the market outlook remains promising. Kippis! (cheers) as our Finnish wine expert remarked last week.

The full report on fine wine investing from Cult Wines can be accessed via this link.