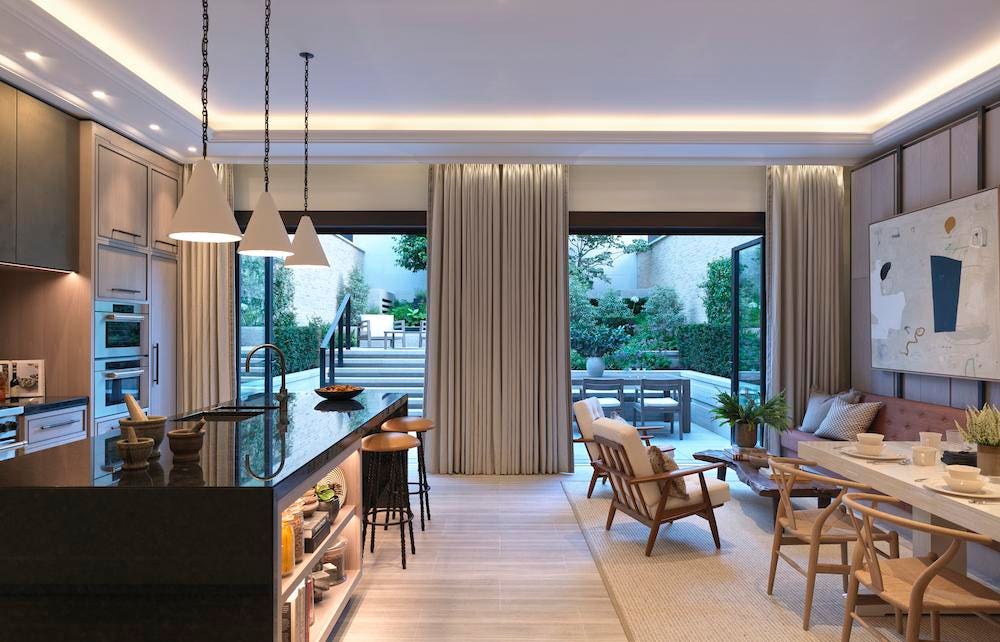 A $1.3 billion purchase of 13 acres in one of London’s most exclusive neighborhoods has turned out to be a good investment. Chelsea Barracks in Belgravia was already seeing strong sales activity going in to 2020 and the same demand continued this year, despite the Covid pandemic. In the first six months of 2020 more than 90% of the homes available had been sold, all of which are asking prices roughly $7.5 million and up. This is consistent with luxury buying trends seen across the city. According to data from KnightFrank, the first quarter of 2020 saw at least 30 transaction over £10 million, which surpassed the 18 and 22 sold during the same time frames in 2019 and 2018, respectively.

The Chelsea Barracks sales were largely the condos released as part of Phase 1, but now 13 six-story townhomes are on the market ranging in price from £38 to £50 million (approximately $50 million to $75 million USD). The home asking £50 million is a seven-bedroom, 14-bathroom home with separate guest house. The developers have provided a few photos of the £38 million, a five bedroom, 10-bath property with 9,902 square feet.

Twelve years ago the real estate investment firm Qatari Diar, part of the Qatari Investment Authority, purchased what had been a former military base with the intention of turning the property into modernized dwellings. Its sale price of $1.3 billion makes it the most expensive land transfer on record in the UK. After much discussion and debate, the project was eventually approved as long as it retained a Georgian aesthetic and provided ample outdoor space that could be accessed by the public. Nearly 40% of the 12.8 acres are landscaped public gardens.

These 13 townhouses are an example of how the architects from PDP London were able to keep the exterior in line with requirements but also maintain contemporary features on the inside. The interiors, concepted by Albion Nord, reach as far as 30 feet wide, which is rare for a London property, and have high ceilings to add to the sense of space. With a commitment to vertical living the six floors of the home are divided into bedrooms on the upper levels and the lower floors dedicated to living rooms, a kitchen with private outdoor access, staff accommodation and parking. Each townhouse has its own private pool, gym, theater and wine storage.

All residents of Chelsea Barracks have access to amenities in the development’s Garrison Club, with a lounge, spa, pool, business suite, billiards room and movie theater.

In addition to these townhouses, another standalone single family home is complete and ready for purchase at £18 million (or $25 million USD) as well as three penthouses whose asking prices have not been revealed. For more information visit the Chelsea Barracks website.