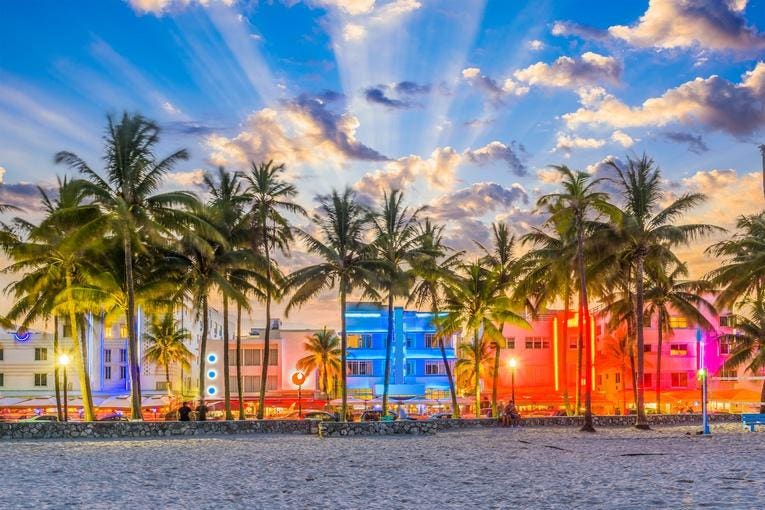 If you’ve looked at the temperature gradient maps of the continental U.S. over the past few weeks, it’s not hard to see one main reason why Miami and South Florida’s real estate markets are on fire.

With partial lock downs and restrictions on indoor dining, entertainment, sports, and gatherings still in effect in many states (with no clear end in sight), any place that offers the opportunity to do anything outside without wearing snow boots and chipping ice is worth paying a premium for right now. The average daily high in Miami over the past two months has hovered around 76 degrees with mostly clear skies.

Add to that an open economy, fewer masking requirements, relatively low COVID-19 case counts, a booming remote work scene, stable politics, and no state income tax, and it would be easy to think that South Florida’s recent real estate boom could have been predicted. Yet, no one did. Like everything over the course of the pandemic, it all happened so fast. South Florida realtors and developers also have learned to be leery of the bubbles since they know what it’s like on the other side.

This time, however, South Florida’s real estate resurgence has all the signs of a boom that’s here to stay for a while as the country’s other major metropolises like Manhattan and San Francisco struggle with a long-term re-pricing in the other direction.

Examples of South Florida’s super-charged market are everywhere. More eye-turning than what buyers are willing to pay right now, however, are what the market reveals about buyers themselves and the factors driving them.

“Houses like The Beach House are going into bidding wars as soon as they hit the market,” says Marulanda, CEO of Luxury Homes Connect, of the UHNW, out-of-town rush for the last remaining scraps of luxury, waterfront real estate south of Palm Beach. “The Beach House is a two-story residence in a boutique building that has the space and feel of a single-family home. It’s the ultimate hybrid property. As much as the single-family market is absolutely killing it and stealing the show, there are a lot of people coming from cities right now who are used to being in condos and their families sometimes don’t feel as secure and comfortable without having the assets that a building has.”

The list of other top-tier sales over the past eight months, including dozens of celebrity buyers, goes on and on. Ivanka Trump and Jared Kushner recently snatched up a $31M waterfront plot on tony Indian Creek (a.k.a “Billionaire’s Bunker), complete with 13 private police and a marine guard, not far down the street from Tom Brady and Giselle Bündchen’s new $17M digs. Among their 29 other neighbors on the island are Julio Iglesias, investment titan Carl Icahn, supermodel Adriana Lima, and local billionaire Jeff Soffer.

As recently as 2019, the possibility that so many domestic buyers would be vacuuming up the highest ends of South Florida real estate would have been almost unimaginable. During most South Florida real estate booms, as much as 80% of the buyers for most high-end properties have been foreign, predominantly from South America, Russian, and Asia. Since the beginning of the pandemic, however, those numbers have inverted to up to 70% domestic, amplified by the fact that most foreign buyers still can’t get into the U.S.

That hasn’t stopped some in the global UHNW crowd from getting in on the action sight-unseen, however. Earlier this year according to confidential sources, two recently minted Thai billionaires reportedly bought one of the most expensive houses in South Beach, having made their fortunes over the last twelve months manufacturing hundreds of millions of facemasks and PPE for governments, hospitals, and frontline workers around the world.

Farther north in Palm Beach, an undisclosed Russian just laid claim to buying the most expensive home in Florida ever, paying $140 million in cash for a 21,000 square foot spec house built on three connected beachfront lots previously owned by former President Donald Trump. It reportedly went under contract 24 hours after being listed.

Beyond the anecdotes and record smashing, however, the real estate data are harder to ignore, no matter how cynical one might be about the Monaco-esque 1% vortex that South Florida is rapidly becoming.

ONE Sotheby’s recently released January 2021 Market Report is riddled with statistics that realtors and developers would have scoffed at as recently as a year ago.

For example, average for-sale prices for single family homes in South Florida’s four primary counties skyrocketed year-over-year, according to ONE Sotheby’s report, including Miami-Dade (42%+), Palm Beach (20%+), Martin (20%+) and Broward (12.5%). Sales of homes over $3M have increased for seven consecutive months, and 17% of all single-family homes across all price levels closed in January sold above list.

“Since June 2020 the market has performed at levels we’ve never seen,” says Daniel de la Vega, President of ONE Sotheby’s. “There’s been a ‘reset in pricing’ over 75% in some sub markets, specifically with single-family homes. Buyers are primarily 40 to 60 years old, mostly hedge fund, private equity, and finance people who have cash in hand. But now we’re also seeing a tech movement like we’ve never seen before and it’s all snowballing. If something is on the market right now and it does not sell, it’s overpriced.”

A similar Q4 Miami report produced by luxury brokerage RelatedISG tells the same story. Total active single-family home listings in Miami-Dade, Broward, and Palm Beach counties hit a twelve-year record low at the end of 2020, with only 9,495 homes on the market across all price ranges, compared with a recent peak of 20,646 in 2015. Year over year, single-family home sales above $5M have surged 225%, 67% of which occurred in Miami Beach, Coral Gables, and Fort Lauderdale with an average closing price of $10.4M.

Per RelatedISG’s report, even the condo market is getting tight (gasp!) due to the scarcity of single-family homes, particularly in low-density boutique buildings where in-house amenities like pools, gyms, spas, and business lounges offer more opportunities for space and distancing. Most developments are now 90% to 100% occupied or sold, and condo transactions in Q4 2020 accounted for almost 50% of all residential sales, an almost 100% increase since the beginning of the 2020 and leaving only 690 standing units for sale in Miami and Fort Lauderdale. As a result, new buildings that are still just piles of dirt and weeds and years away from delivery are pre-selling out within 30 days of launching.

In some respects, it would be easy to see South Florida’s real estate boom as largely circumstantial, which historically makes a lot of people here nervous because circumstances change, particularly in highly elastic real estate markets like Miami. The pandemic era’s rapid shift in consumer preferences just happened to smash head on into record low mortgage rates, a national permissibility to work remotely, millions of new Millennials and Baby Boomers looking to buy up or down, and a global pandemic. And voila! A boom.

In other ways, however, South Florida’s resurgent real estate market was inevitable, as anyone who’s lived here for years will attest. It just happened to be accelerated by COVID-19 in longer-term, more structural ways that no one could have predicted. Most out-of-town buyers were already moving to South Florida from high housing cost, high tax, high density states like New York, Connecticut, New Jersey, Illinois, and Massachusetts seeking a lower cost of living, better weather, and a healthier quality of life. Now they’re just coming like a tsunami. Cash in hand. For good.

“People are coming here for all the reasons they have always migrated South,” says ONE Sotheby’s de la Vega, “Lifestyle, the weather, the beaches, the low tax environment. But this time around the main differentiator is that people are not only coming for the lifestyle, they’re coming to live. When you come to live, you have other requirements like schools, arts and culture, restaurants, country clubs, office space, all of which are in very high demand right now.”

The biggest question on most people’s minds at this point is how long the current boom will last.

“The US Federal tax reform act of 2017 will be the main driver if what we’re seeing right now continues,” says Craig Studnicky, RelatedISG’s CEO and President. “There’s a reasonable argument that Trump punished certain “Blue” states, like NJ, NY, Connecticut, Massachusetts, Illinois, and California, which resulted in a mass exodus to places like South Florida. Then COVID-19 acted as an accelerator in 2020. The pandemic will eventually pass, which likely will slow down the pace of in-migration. But unless the tax reform act of 2017 is repealed, this boom is sustainable as long as the underlying tax expense and planning incentives are in play.”

By the numbers, all of this is great news not only for South Florida’s real estate market and developers, but also for the long-term sustainability of the region’s economy. At this point in-migration into Florida shows little sign of slowing, and financial firms like Goldman Sachs, Blackstone, Citadel, and Elliott Management as well as several venture capital firms are reported to be not far behind. At the same time inventory has nowhere to go but down. New ground-up condo and housing developments take years to launch, design, and build. So, in the meantime, prices have nowhere else to go but up.

As one broker recently told me, “It’s a great day to be a real estate agent in South Florida.”

For anyone looking fly south for the next few years (or the rest of their lives), you’d better get in while you can.